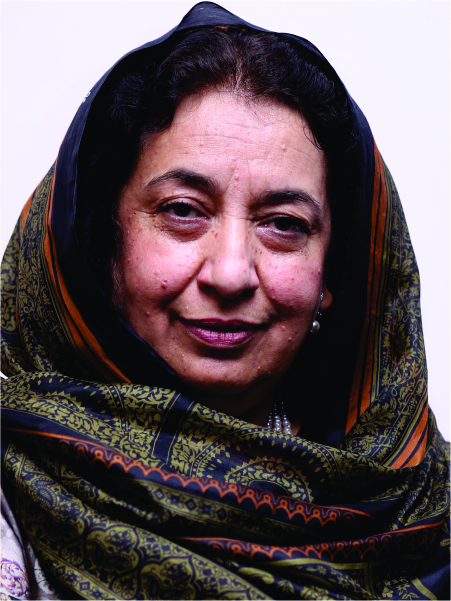 I am honored to represent Rahnuma-FPAP as its 9th President. I am also indebted to inherit a very strong and cherished legacy of my predecessors especially Begum Surraya Jabeen (who remained associated with Rahnuma-FPAP for more than forty years) and Ms. Mahtab Akbar Rashdi, (who remained President for two consecutive terms and now the Chairperson of Rahnuma-FPAP) as during their tenure Rahnuma-FPAP ushered a new era of excellence, recognized at the national and international levels. In 2009 Prime Minister of Pakistan awarded Performance Excellence Award to Rahnuma-FPAP, prior to this Rahnuma-FPAP was awarded Common Wealth Youth Service Award in 1996 for promotion of small family norm amongst the newly wed couples, Common Wealth Award of Excellence 1997 for famous Girl Child Project, Common Wealth Service Award for initiating holistic/integrated family planning and reproductive health approach at grass root levels in 1997 and Common Youth Services Award 1998 for Self-Employment Scheme for Youth.

Rahnuma-FPAP carried out diverse nature of advocacy and services delivery projects across Pakistan as it has more organized and integrated services delivery infrastructure and distinction to work with almost all major international bilateral and multilateral donor agencies and public sector institutions. It (since its inception -1949) remained at the forefront to implement a rights based agenda in Pakistan through program interventions specifically targeting the vulnerable and marginalized sections of society. It is pertinent to mention here the famous flagship “Girl Child Project (1991-2006)” funded by UNICEF, aimed at development and empowerment of marginalized girls through life skill based training/education, first aid training, in home and school training, leadership development and awareness on RH and Rights. The project initially started at ten locations but expanded to more than 730 locations across Pakistan directly benefiting more than 36,500 girls, 6,900 boys and 217,000 families.

At the social development front Pakistan 6th largest populated country in the world is confronted with many challenges including high population growth rate, low CPR, one of the highest MMR and IMRs, second lowest place on gender parity index, but with a second highest youth bulge. This high population growth is putting great strain on our meager resources like food, water, clothing, housing and jobs etc. On the other hand imposition of Global Gag Rule by new US administration, UK Government Brexit decision, and lack of political and financial ownership for social development issues by local leadership has increased our challenges manifold.

During 2016, the organization underwent a dynamic shift by adopting its new Strategic Plan 2016-2019 and electing new governing body (National Executive Committee-NEC and National Council-NC) to transform new strategic direction into actions. I have a firm belief that the new governance body is equally committed and endeavored to transform its new Strategic vision into attainable targets and goals while providing leadership role to management equally confronting and overcoming the population and SRH&R challenges at local levels.